Thor is sprung back into the spotlight in Marvel’s Thor: Love & Thunder!  Working with Director Taika Waititi and multiple departments and collaborators, including VFX Supervisor Jake Morrison, VFX Supervisor Glenn Holbrook and VFX Producer Lisa Marra, teams from The Third Floor had a blast contributing to a fourth film following the God of Thunder!

Multiple sequences were visualized using previs, postvis or both techniques as the movie travels new ground from New Asgard to Zeus’ Golden Temple to a moon in the Shadow Realm. Development of looks and action for these story settings was supported by visualization as shots moved from ideation and planning into production and post.

“In The Golden Temple scene, we visualized establishing shots for the exterior and interior of this massive and impressive building as well as the entry of Zeus, who the filmmakers wanted to introduce in big spectacle fashion,” notes Visualization Supervisor Gerardo Ramirez. “We also had a lot of fun previs’ing the Goat Boat crashing through the rose window and the heroes escaping with Zeus’ mighty Thunderbolt weapon in tow.  In postvis, we added digital Spartans and comped in the background and effects, including an extravagant amount of gold blood. Another great moment we worked on was the take-down of Korg that resulted in the destruction of his body, leaving only his face alive.”

Action shot of Thor’s Goat Boat coming to the rescue as visualized in previs. 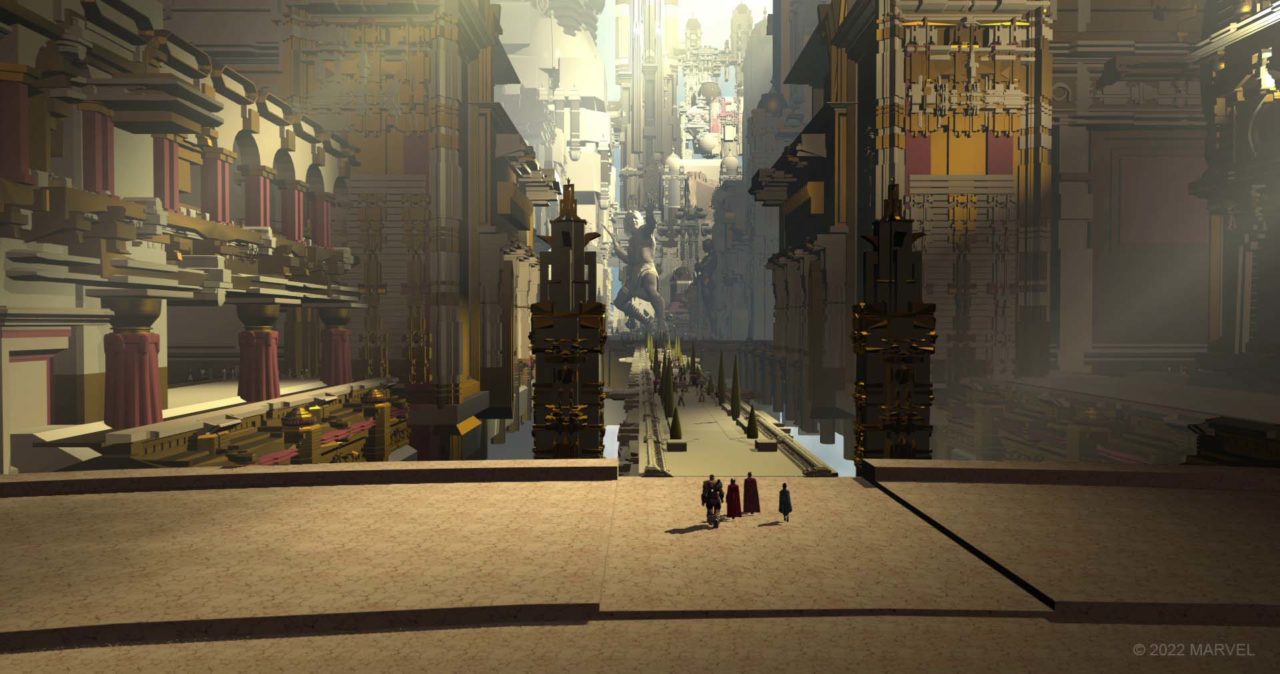 Previs of The Golden Temple, which features an array of gods with different specialties, including magic, dreams and carpentry. 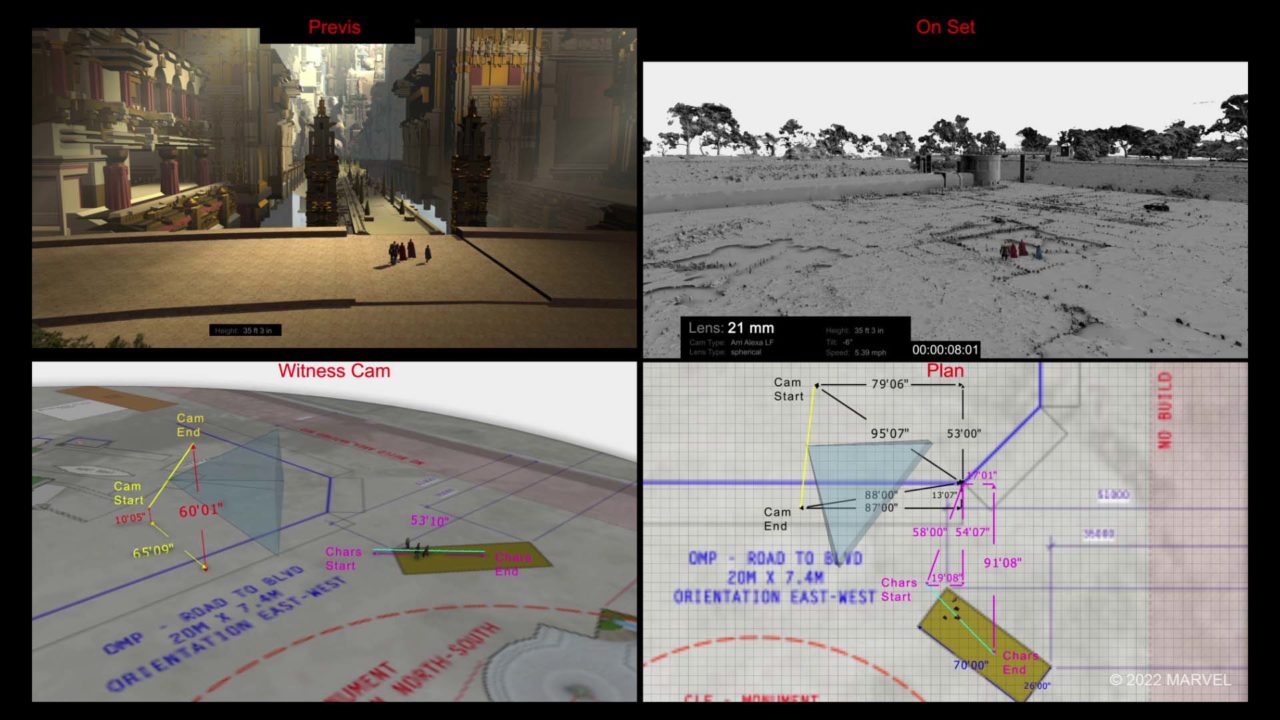 Techvis visualization for the large environment and arrival into the Golden Temple.

For the Moon of Shame, The Third Floor contributed to look dev as well as action blocking.

“Our team prevised the arrival to the Moon of Shame and various beats in the battle with Gorr the Butcher,” Ramirez continued.  “We assisted in exploring concepts for the moon’s unique look, rotating lighting and low gravity, also visualizing moments of action as Gorr attempts to complete his mission to eliminate the gods.”

On The Moon of Shame, located in the Shadow Realm, Thor, Jane Foster and Valkyrie confronted Gorr the God Butcher.

A number of key reveals happen in New Asgard, where Thor reencounters Jane Foster.  In a key scene, a battle with Shadow Monsters becomes a battle of wills as Jane is revealed as The Mighty Thor, now controlling Thor’s hammer.

“It was an exciting challenge to explore unique and creative ways in which Jane Foster as Mighty Thor could use Mjolnir in battle” Ramirez says.  “It was important that she felt powerful but still had her very own style and that she used the hammer in ways we’ve never seen Thor use it – so much so that he would feel a little bit of jealousy.  The filmmakers found a really clever balance of this that adds to the comedy and the storytelling.”

TTF’s previs for scenes like the battle in New Asgard used Unreal Engine to maximize mood, lighting and visual tone.

During filming, TTF also worked closely with VFX Supervisor Glenn Holbrook on techvis shots to help determine setups for filming. Notes Ramirez:  “Glenn and his team would capture Lidar data of the sets and we would ingest that into our techvis files.  We could then work the techvis to visualize how they wanted to approach some of the more complicated shots.”

Real-world lighting was applied to techvis renders to approximate with high accuracy the lighting situation for the date the shots were expected to be filmed.  This allowed production to see how shadows from the set, bluescreens, trees,and surrounding buildings might affect the look of the shot and to determine the best time of day to film.

Following the shoot, The Third Floor worked with the film team and editorial to create postvis for 44 sequences, delivering more than 17,000 postvis renders that could be used to help progress sequence edits and final VFX.

The View From The Third Floor: Janneke Vennema-Osborne

Thor is sprung back into the spotlight in Marvel’s Thor: Love & Thunder!  Working with Director Taika Waititi and multiple departments and collaborators, including VFX Supervisor Jake Morrison, VFX Supervisor Glenn Holbrook and VFX Producer Lisa Marra, teams from The Third Floor had a blast contributing to a fourth film following the God of Thunder!...

The View From The Third Floor: Johnson Thomasson

Thor is sprung back into the spotlight in Marvel’s Thor: Love & Thunder!  Working with Director Taika Waititi and multiple departments and collaborators, including VFX Supervisor Jake Morrison, VFX Supervisor Glenn Holbrook and VFX Producer Lisa Marra, teams from The Third Floor had a blast contributing to a fourth film following the God of Thunder!...
Prv