The View From The Third Floor: Suzanne Cipolletti 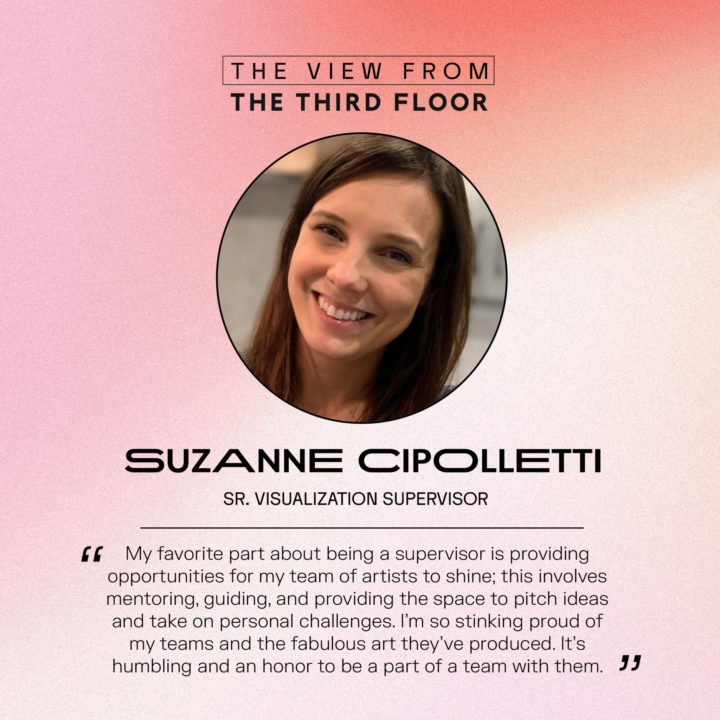 What is your name and what is your position at TTF?
Suzanne Cipolletti, and I am a Sr. Visualization Supervisor at TTF.

How long have you been with TTF?
Just over 13 years!

What does your role look like day to day?
As a Sr. Visualization Supervisor, my “day to day” can vary quite a bit. On the whole I would say that while the main focus is on helping our clients to tell their stories visually, a large part of the job for me is also cultivating a project environment where each member of my team thrives.
This role is a pretty fluid and an ever-changing state to live in each day, but the team collaboration both client side and internally is exciting.

What led you to work in the visualization and entertainment industry?
From early on I was always enamored with film, specifically old Hollywood musicals, ‘Singing in the Rain’ anyone? I also grew up in the Disney golden age, so I was hooked on animation as well. I knew I wanted to be an animator, but I also didn’t want to only work on animated films. I was interested in cinema as a whole! At the time I didn’t know what that would look like other than being inspired by movies like ‘Who Framed Roger Rabbit’. When I graduated from college, my first job would give me a taste of visualization, but from a completely different industry. I found myself doing visualization in the form of Space Shuttle launch simulations and more at NASA!
After a time, as the Space Shuttle program was winding down, I started to look into making the jump to the film industry. I was pointed to an opportunity to interview with a new and upcoming company called The Third Floor by a friend. That, coupled with a fortuitous move to LA, began my journey of visualization! TTF was such a small studio at the time and I was fortunate to be there close to the start of it all. Since then, I’ve had the tremendous opportunity to be involved in nearly all aspects of visualization and work on a wide variety of projects.

What is your favorite part about working for TTF?

My favorite part about being a supervisor is providing opportunities for my team of artists to shine; this involves mentoring, guiding, and providing the space to pitch ideas and take on personal challenges. I’m so stinking proud of my teams and the fabulous art they’ve produced. It’s humbling and an honor to be a part of a team with them.

What advice would you give someone looking to get into this industry?
To be a sponge, soak up every chance to grow and learn. Don’t be afraid to take on challenges or work outside your discipline of study, being flexible and adaptable is key. You really never know which skill you’ve picked up could be the one that lands you that dream opportunity!

Biggest milestone at TTF / How have you grown here
I can’t possibly narrow down all the milestones at TTF down to one. I have had such a wonderful career here; starting from story intern to now supervising and creative directing shows!

What’s your favorite creative outlet?
I have a lot, what artist doesn’t? But, if I had to narrow it down to what I gravitate towards most, it would be dancing. I love the freedom of expression it brings to the entire body, to feel and interpret the music visually. There’s also something cathartic about it, especially when most of our work is pretty sedentary.

Where do you draw your inspiration from?
This may sound incredibly simple, but honestly, I draw inspiration from life. The stories around me, family, friends, music, dancing. The art that’s constantly being produced and innovated. There’s inspiration everywhere.

What was your biggest influence as a kid?
By far my biggest influence as a kid was 2D animation. I couldn’t get enough! Growing up I loved to find art books of my favorite movie and tv show characters. I would trace them over and over until I could draw them free hand. I would also pause movies and “step” through them to find the key poses and to break down how it was created.

If not London/LA, where?
I’ve already picked a new “where”! I’m currently working out of TTF’s office in Atlanta, Georgia. It’s such an exciting place to be right now for film and tv!

If Hollywood made a movie about your life, who would you like to see cast as you?
If I could pick anyone from any time period, it would be Judy Garland. A movie about my life would definitely involve some singing and DEFINITELY a lot of dancing.

People would be surprised if they knew…
In college I worked under a local artist and became proficient at welding metal into interesting sculptures and furniture.

The Book of Boba Fett

The Third Floor Designs for the Metaverse