The View From The Third Floor: Ron Friedman 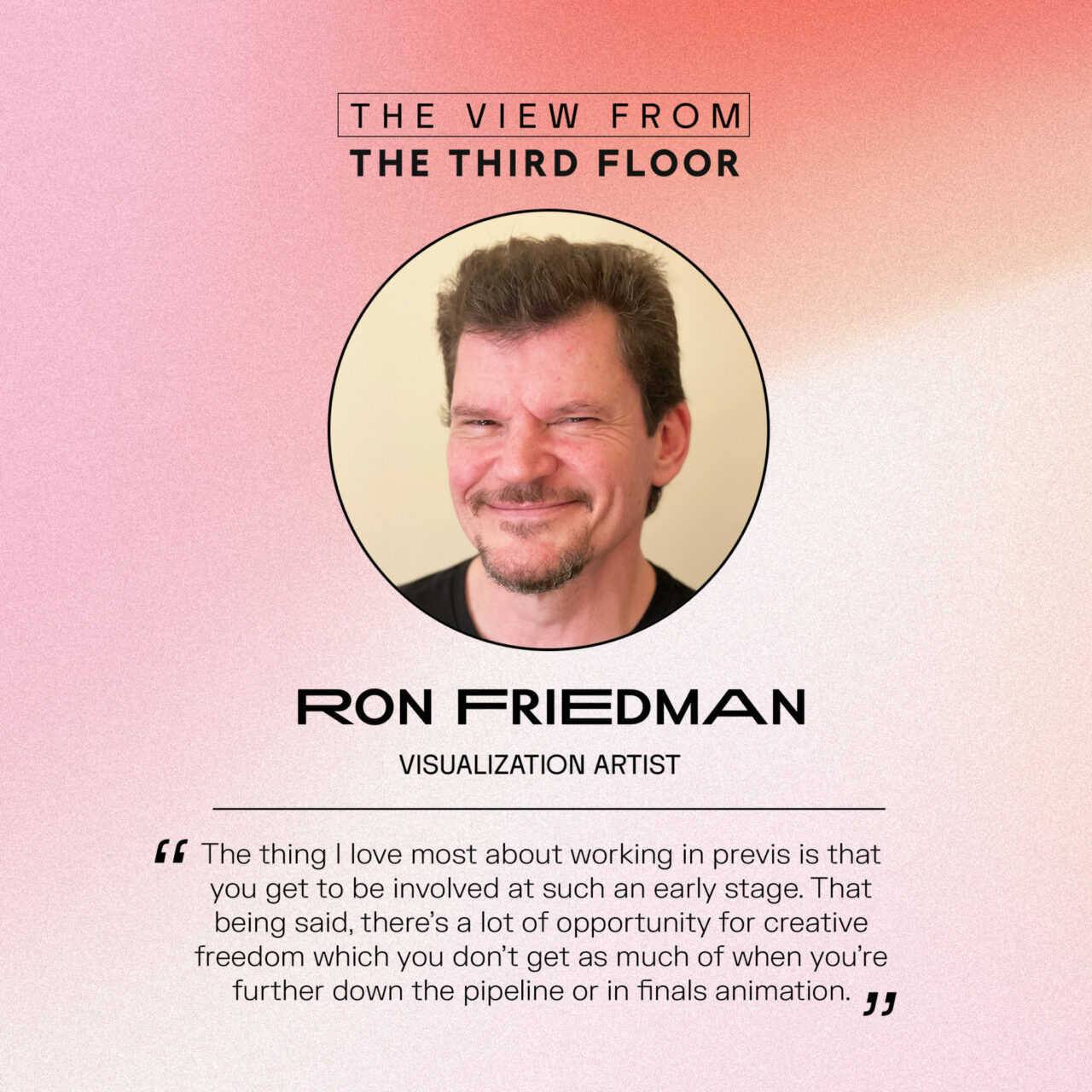 What is your name and what is your position at TTF?
Ron Friedman- Senior Animator / Finals Animator / Started in immersive to previs.

How long have you been with TTF
Since December 2018.

What does your role look like day to day?
In previs, laying out shots and figuring out how something is going to work. The speed at which you’re meant to work along with making sure you have strong poses really helps facilitate being able to turn things over in previs because those basic elements still need to be there. Starting with pose to pose blocking, if the poses are strong, and you allow it to be fleshed out, then it’s just a matter of adjusting the timing. By getting the key poses in, it makes sure everything works and allows for quick iteration. Creating poses takes a lot less time than fleshing out an animation. Here’s a great analogy about scrum development If you’re tasked with building 5 towers out of Legos. Don’t build the first one as high and ask “is this ok?” Start all five with one floor then you can get feedback on each. So next time you put it in front of a supervisor, you’ve re-done them as well as made further progress on the ones that were good to go.

What led you to work in the visualization and entertainment industry?
Growing up I was always a performer. From magic shows to ventriloquism to stunt shows in my backyard and even commercials and voice-overs. In fact, I was in the very first Cookie Crisp commercial! I grew up in LA so I knew how difficult it could be to make a living as an actor. But I realized that animation is just acting and performing! The other thing I loved about animation was the fact that I wasn’t limited by my age, body type, or gender. Over the course of the 30+ years I’ve been animating, I’ve been old ladies, little babies, even Boba Fett and Tigger! I got to be all these characters and it was so much fun. I wasn’t a strong enough traditional artist to get into art school, but there were animation classes at the Animators Union that people in the industry were teaching at, so I used to take classes there. Later, I got an internship at a small studio working 9 – 5, 40 hrs a week just to learn and then I would work at night as a security guard. So after about a year I got a job as a clean up artist on the Swan Princess which got me into the union, and that became my in.

What is your favorite part about working for The Third Floor?
One of the things I love about working at TTF is that you can be working on different projects over a specific period of time and then hop on to another. I enjoy the variety of the work that I get to do.

The thing I love most about working in previs is that you get to be involved at such an early stage. That being said, there’s a lot of opportunity for creative freedom which you don’t get as much of when you’re further down the pipeline or in finals animation.

What advice would you give someone looking to get into this industry?
In a lot of ways, previs is one of the last bastions where being a generalist across multiple disciplines is beneficial. Nowadays, especially in film, you’re required to specialize, but a lot of that can take time. If on top of that, you know how to do a little of this and that, it’s certainly helpful in previs because you’re setting up the shot from scratch. I always have people show me different skills or techniques so I’m not only strengthening myself as an artist/animator, but also becoming more well-rounded as an artist in general because I’m always learning and increasing my skill set here.

Biggest milestone at TTF / How have you grown here?
I’ve been able to gain skills outside of just animation, rigging, and game engine implementation. I’ve learned so much about lighting and other things that I didn’t know before. Being surrounded by people who have a lot of knowledge in a variety of disciplines is really cool.

What’s your favorite artform?
Creating experiences for people and letting them forget where they are for a moment, and now VR. With digital technology, you can create an experience with VR and digitally send it to someone halfway across the world to experience it. VR has nowhere to go but up, I’m super stoked for it.

If you hadn’t become an artist, what would you have been?
I never properly went to art school, so I was never required to do a short of my own. I’ve had an idea for an animated video for the longest time. After working here, I realized that I can use previs for it. I wouldn’t have gotten the skills or thought to previs it if I hadn’t started working here. So TTF has helped me get that project off the ground!

Where do you draw your inspiration from?
Anytime I go see a movie I’m filing it away in my data banks for future use. Being an animator or artist of any kind makes observation an art form. Great artists are not great artists because they can hold a pencil a certain way, they know how to see in a way that pertains to their discipline. So whatever I’m experiencing or doing, I’m looking for ways to add to my palette and touch people in an emotional way and connect with them.

You’re on the run from a hoard of zombies, what do you do?
Ask for directions!

If not LA, where?
I’ve lived in Sweden and various places around the United States, and of course I would love to globe trot. But that’s also one of the cool things about TTF is that they have work all around the globe and you might get asked to work in Australia or London or another part of the world.

If Hollywood made a movie about your life, who would you like to see cast as you?
Bugs Bunny

Fictional character you’d share a pint with
Bugs Bunny…. while we talk about him playing me in the upcoming production of the Ron Friedman story.

TV Show/Film that is your guilty pleasure
“Nailed it!” on Netflix

What is your name and what is your position at TTF? Ron Friedman- Senior Animator / Finals Animator / Started in immersive to previs. How long have you been with TTF Since December 2018. What does your role look like day to day? In previs, laying out shots and figuring out how something is going...

What is your name and what is your position at TTF? Ron Friedman- Senior Animator / Finals Animator / Started in immersive to previs. How long have you been with TTF Since December 2018. What does your role look like day to day? In previs, laying out shots and figuring out how something is going...
Prv