The View From The Third Floor: Sean Rourke 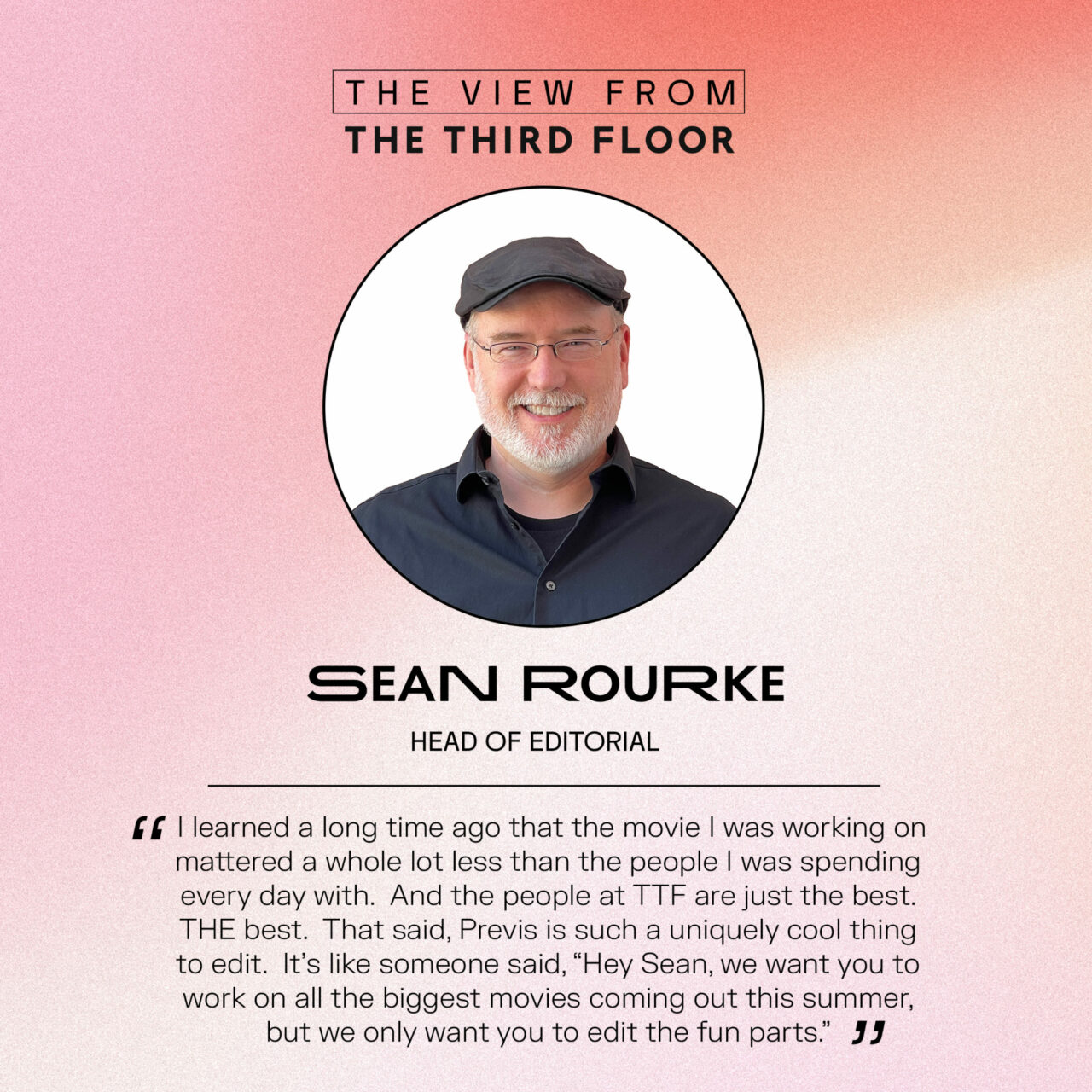 How long have you been with TTF?

What does your role look like day to day?

I edit on active shows, but I also handle the scheduling and hiring of our editors, as well as answering questions about editorial workflow, liaising with IT, and sitting in on the odd meetings here and there.

What led you to work in the visualization and entertainment industry?

My parents love movies, so we saw a LOT of them when I was a kid. When I told them I wanted to go into the movie business, it wasn’t a big surprise. As far as getting into previs, that was actually a dream job come true. The VFX company I had been working for went out of business, and TTF had an opening for an editor. I had wanted to edit previs for a couple years, so I applied. And now here I am!

Oh man, THE PEOPLE. I learned a long time ago that the movie I was working on mattered a whole lot less than the people I was spending every day with. And the people at TTF are just the best. THE best. That said, Previs is such a uniquely cool thing to edit. It’s like someone said, “Hey Sean, we want you to work on all the biggest movies coming out this summer, but we only want you to edit the fun parts.”

And as far as my role, I love being able to advocate for the editors. If I can make sure both the editors and the shows get what they need, then it’s a good day.

What advice would you give someone looking to get into this industry?

It’s a good question. My advice is, figure out specifically what interests you, then figure out what places do that thing. Then apply to those places consistently. Get in as a PA or a courier or a janitor, it doesn’t matter as long as you’re around the work you want to move up into. Taking a job in an unrelated corner of the industry is wasted time. Two pay-raises into that job, you risk being stuck for life. Get stuck in a place where you do what you want to be doing.

Biggest milestone at TTF / How have you grown here?

I got to work on Godzilla vs. Kong. Four-year-old me was doing a happy dance every day I sat down and helped bring Godzilla to life. Everything else is just frosting now. 🙂

If you hadn’t become an artist, what would you have been?

It probably would’ve had something to do with video. I know this sounds awful, but part of me always wondered what a career at the NSA would’ve been like. Not because of spying on people, but because of the video surveillance technology. It’s fascinating to me.

Where do you draw your inspiration from?

Oh man, it can come from literally anywhere. A comic-book cover, a piece of concept art, an interesting character dynamic in a streaming show, a piece of music, a D&D book… I always make it a point to walk the entire floor of Comic-Con just to soak up all the cool imagery from the year.

What piece of media was the biggest influence on you as a kid?

Godzilla, probably. But also Star Wars. Then, in the 6th grade, I was flipping through channels with a friend, and we came across Myazaki’s Nausicaa: Valley of the Wind, like 10 minutes in. I was captivated. I had just never seen anything like it before. And we had no way of finding out what it was, because there was no channel guide or internet back then! I had to wait until college before I happened across it in a video store, and finally had a title!

If Hollywood made a movie about your life, who would you like to see cast as you?

People tell me I sound like Nick Offerman. How cool would that be? Just need to get him the hat…

People would be surprised if they knew…

The View From The Third Floor: Joanne Smithies

What is your name and what is your position at TTF? Hi! I’m Sean Rourke. I’m the Head of Editorial at TTF. How long have you been with TTF? Almost 8 years now! What does your role look like day to day? I edit on active shows, but I also handle the scheduling and hiring...
Nxt