In order to tell such ambitious episodic stories against the backdrop of a vast cinematic universe and still deliver on a tight production schedule, Lucasfilm and Industrial Light & Magic (ILM) combined forces with THE THIRD FLOOR’s Virtual Production Team. Throughout the ambitious production of The Mandalorian: Seasons 1 & 2, both companies developed a host of new virtual technologies and techniques to streamline production. In this edition, we discuss how these real-time advancements were leveraged to preserve more time for creative experimentation and synchronize virtual and real-world sets, lighting, and camera setups.

The Virtual Production Process on The Mandalorian began within the Virtual Art Department (VAD). VAD artists were able to reference inspirational production design concepts and build them as explorable 3D virtual sets. These pivotal set pieces were virtually scouted by directors and DPs who could evaluate lighting, mood, and time of day choices to inform their real-world lighting decisions. 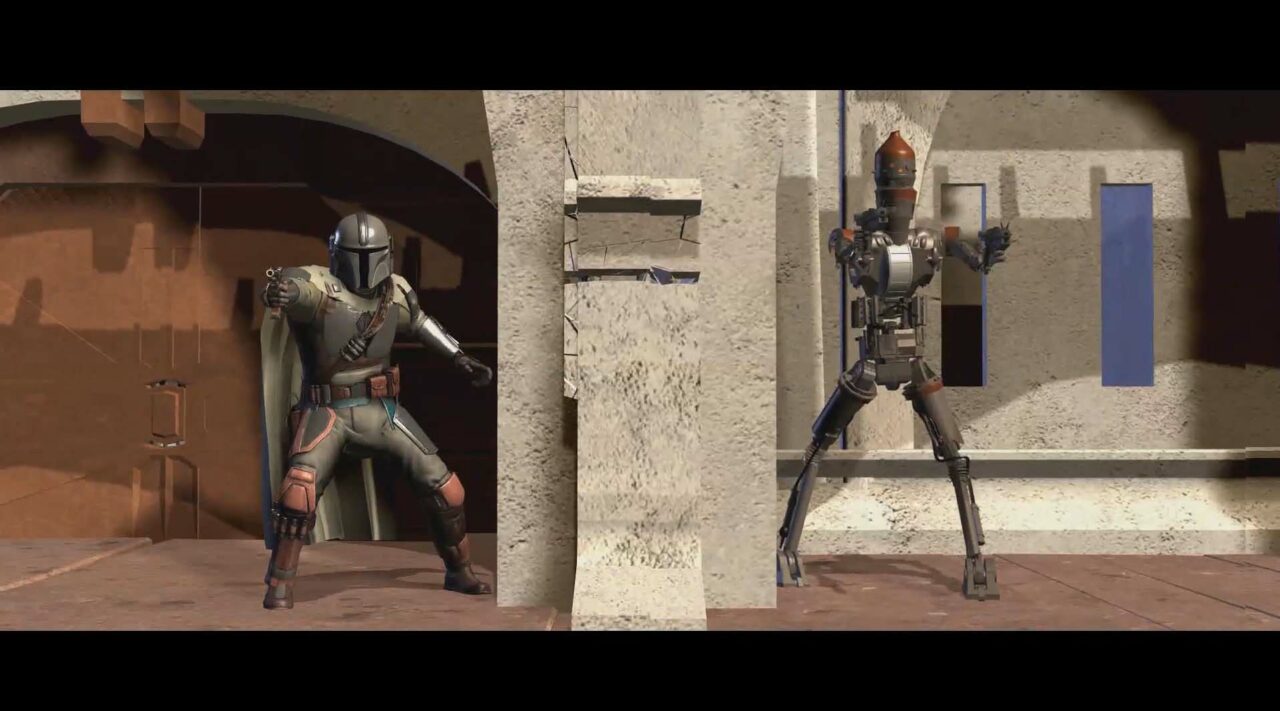 The makers of The Mandalorian forged new production pathways to bring the sprawling visual universe of Star Wars to a weekly streaming series. Key action and setups blocked by THE THIRD FLOOR visualization artists (led by Supervisor Chris Williams in close collaboration with each episode’s director) provided a streamlined way to develop shots that not only enhanced the story, but also worked within each limited virtual environment.
Pictured: Previs by THE THIRD FLOOR from The Mandalorian, Season 1, Chapter 1: The Mandalorian. Image courtesy of THE THIRD FLOOR, Inc. and © Lucasfilm Ltd. All Rights Reserved.

Through virtual blocking, directors and creative teams can rehearse their vision in a virtual sandbox. Cameras can be placed by the previs team (or) shots can be explored and lensed on the fly with a virtual camera. Pictured: Previs frame by THE THIRD FLOOR from The Mandalorian, Season 1, Chapter 2: The Child. Image courtesy of THE THIRD FLOOR, Inc. and © Lucasfilm Ltd. All Rights Reserved.

Using virtual blocking, directors are able to plan their scenes shot by shot and communicate a clear vision for what will be filmed. Coverage can be visualized to design moves in virtual environments that represent physical LED volumes, stages, and locations. This helps crews plan to be more efficient on the day of shooting.

Virtual blocking can be produced faster than traditional animated previs by leveraging real-time tools such as wireless motion capture and virtual cameras. Performances by actors and stunt personnel can be directed and recorded, and any changes or new ideas appear instantly as fully-rendered previs in real-time. Directors can lens shots interactively and refine their shot list efficiently. 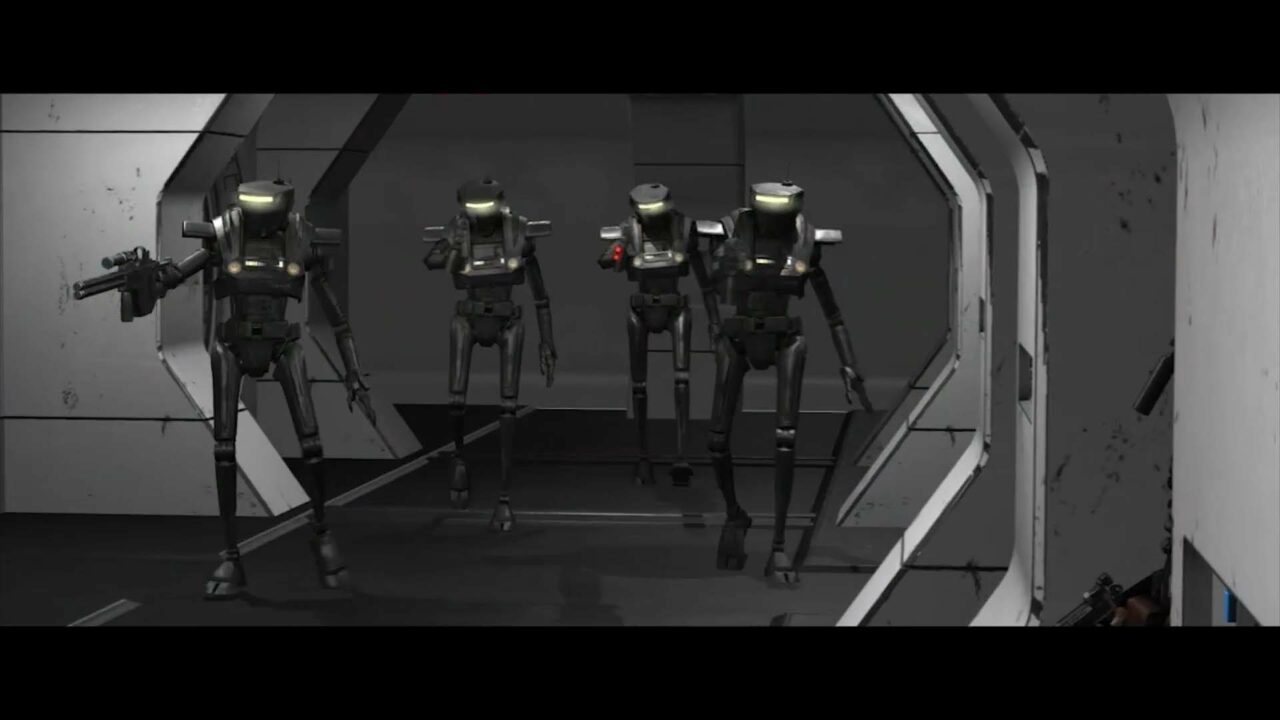 Action for the 9-on-1 droid fight in Season 1 was blocked in real-time using motion capture and in-engine previs. For a more efficient shoot, THE THIRD FLOOR team including Chris Williams, Johnson Thomasson, and Casey Schatz captured four motion capture performers over multiple passes in which three actors played different robots. Director Rick Famuyiwa was able to work with the performers while seeing the results live on previs characters within the Unreal Engine.
Pictured: Real-time previs and motion capture visualized by THE THIRD FLOOR from The Mandalorian, Season 1, Chapter 6: The Prisoner. Image courtesy of THE THIRD FLOOR, Inc. and © Lucasfilm Ltd. All Rights Reserved.

Digital assets are available for use on set by leveraging THE THIRD FLOOR-developed virtual production app, Cyclops, to view CG characters live in real shooting environments. 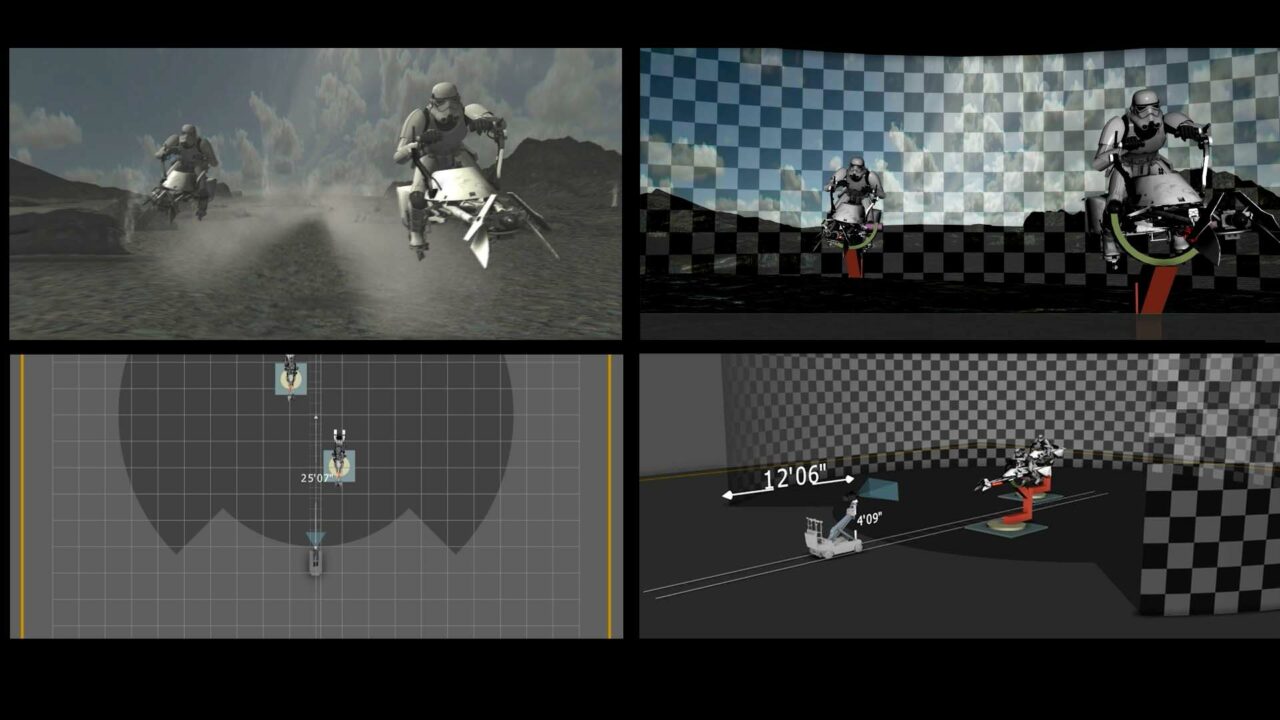 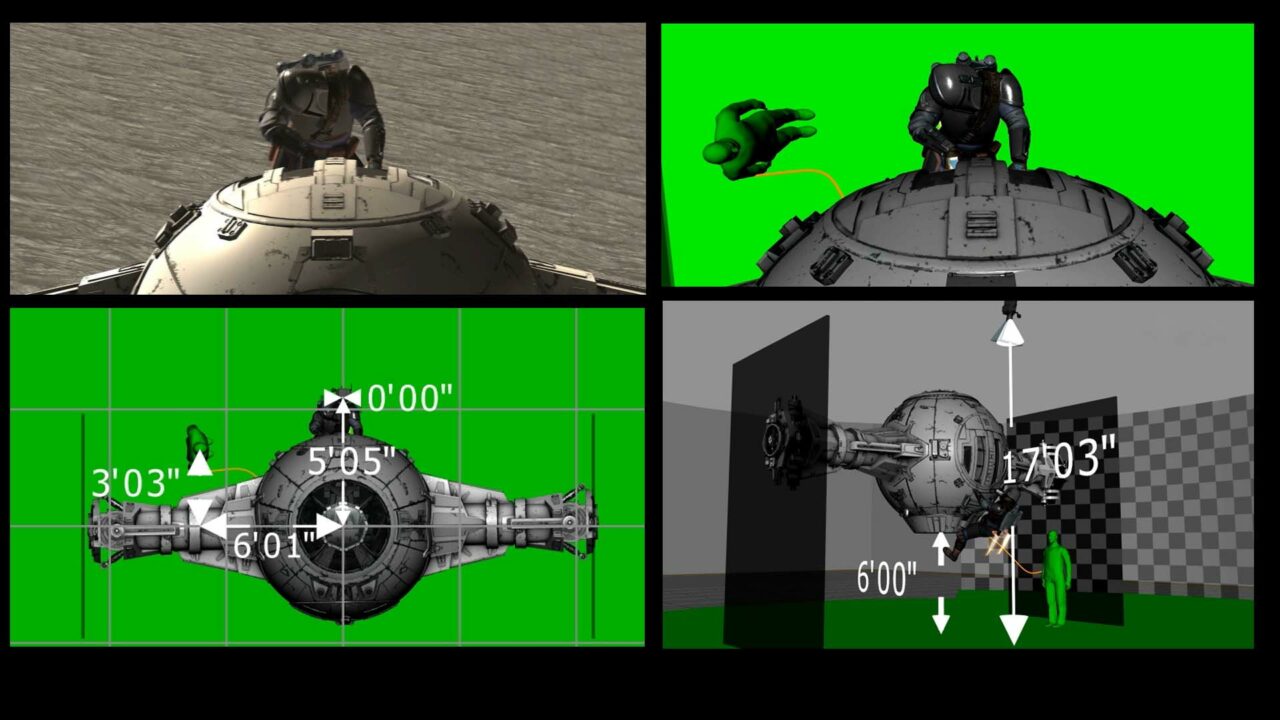 Technical Visualization (Techvis) has helped the teams realize complex Star Wars action — like Mando jet-packing aboard a Tie Fighter.
Technical visualization by THE THIRD FLOOR for a stage shoot from The Mandalorian, Season 1, Chapter 8: Redemption. Image courtesy of THE THIRD FLOOR, Inc. and © Lucasfilm Ltd. All Rights Reserved.

The virtual production techniques developed for The Mandalorian demonstrate some of the ways the Visualization Industry is evolving rapidly to accelerate production, and define directors’ visions as early and comprehensively as possible! Be sure to stream The Mandalorian Season 2 on Disney+ October 30th!

To learn more about visualization support for your projects, feel free to email visualization@thethirdfloorinc.com.

Wherever he goes, we go! Audiences love The Mandalorian and it’s become a major industry phenomenon! The long awaited Star Wars live-action series first premiered on Disney+ last fall and recently earned the streaming network’s first-ever Emmy Award. In order to tell such ambitious episodic stories against the backdrop of a vast cinematic universe and...