The View From The Third Floor Beijing: Billy Tai 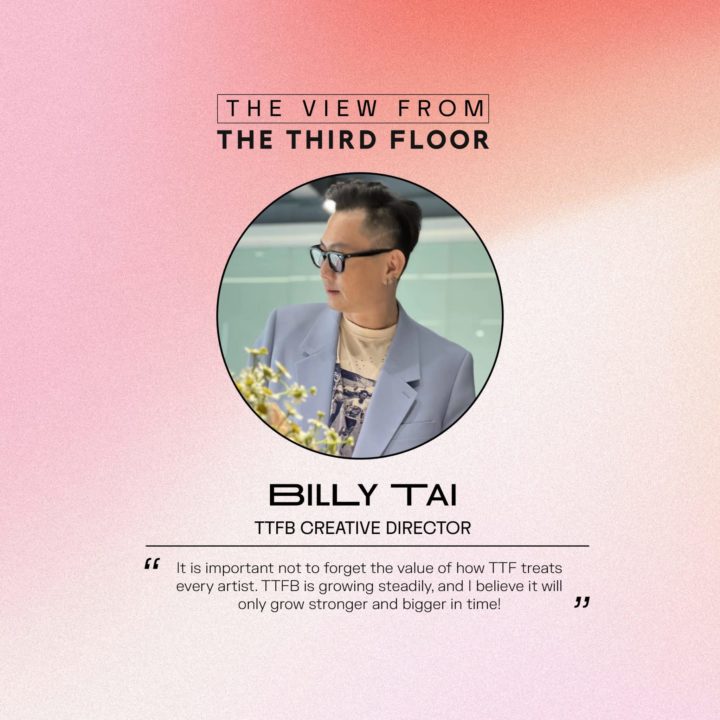 My name is Billy Tai, and I’m Creative Director at The Third Floor Beijing (TTFB).

How long have you been with TTF?

I was at the LA studio for around 2 years on and off before moving to the Beijing studio. I have been at TTFB for just over a year.

What does your role look like day to day?

My typical day consists of being in front of the computer with a strong cup of coffee, creating shots and edits. Some days would involve heading out to different clients’ offices and presenting PowerPoints. Other days would be giving speeches to organizations and events that perhaps will land us a project in the future. Educating the China industry about what visualization can bring, save, and how it can benefit their project is ultra-important. On a hard day, it would be all the above all at once.

What led you to work in the visualization and entertainment industry?

To everyone’s surprise, my first major in college was accounting. I didn’t think much about my future and figured I would follow what my family does and become an accountant. Honestly, I don’t know how I survived my 4 years at USF, but I managed to graduate with an accounting degree. Upon graduation, my next step was to pursue my CPA license. This was when my wake up call hit me hard and I realized that I wanted a job that is not so routine. So I went back to art school and immediately fell in love with filmmaking. Back in those days, previs was unknown and you couldn’t learn it in school. It was in 2005 when I first encountered The Third Floor and saw what previs was, taking a major turn in my life. My days now are on the far opposite spectrum of standard routines, facing exciting challenges and changes every day. That’s the fun part of life, isn’t it?

The use of previs in Hollywood is a standard production procedure where budgets and time are allocated and calculated into the projects before they begin. Sadly, this is not the case in China yet. For decades, Chinese films were made without the use of previs. There are only a handful of projects that incorporated previs (i.e.: “The Wandering Earth”, “Animal World” etc.), so the understanding and use of previs is certainly not the same as Hollywood. I came to Beijing, China in 2018, with the goal to push previs in China. Over the years, I saw many misuses of previs. For example, treating previs purely as layout for post without much creative input being involved. I can’t deny that this is indeed part of the benefit of doing previs, but it’s much more than pretty sequences. Previs can help with various methods of storytelling, solve shooting issues, and much more. So when I learned that TTF opened in Beijing, it was a no-brainer for me to return to the TTF family and continue to pursue the same dream together with the biggest, most successful previs powerhouse.

I absolutely love it when a client denies the need for previs but is willing to give me an hour of their time to go over the TTF PowerPoint. Because at the end of it, they are convinced and promise to use previs for their next projects! Once, I was invited to give a speech at a Chinese streaming platform. Right before the presentation began, the organizer came up to me and said, “Just to warn you, all of those people down there are our directors and they don’t believe in previs.” After the presentation, I had a Q&A section and was pleased to learn that many were hungry to learn more. Some even came up to me and said they’re in preparation for their projects and would like to give previs a try.

It’s a tough challenge here, but certainly worth the battle.

What advice would you give someone looking to get into this industry?

I come across a lot of students who have big dreams and desires upon graduation that want to work at the top studios in Hollywood. This is wonderful indeed. But not everyone can get a job at top studios right away. My advice is to start working at whichever studio you land a job at, big or small. No matter how small the tasks may seem, do the best you can because someone will recognize your hard work. Keep a humble and learning attitude, and opportunities will find you. When I first started in the industry in 2003, previs was not even a thing yet. So you should get yourself in the industry first to find yourself on the radar of other opportunities.

Biggest milestone at TTF / How have you grown here?

Every country has its unique culture. I’m right in the middle of both as I am Chinese but spent most of my life in America. Now based in Beijing working for a Western studio, it is challenging but important to find the right balance in maintaining TTF’s corporate culture, while respecting the Chinese one here. This goes both internally and externally. Externally, one must respect the Chinese culture and the way businesses are done here. When introducing a completely new method of filmmaking from Hollywood, some may find it offensive if you’re not careful how you present the very idea. Internally, it is important to maintain the TTF culture when local projects here often have much shorter time frames. We could be talking about a project that you only get your hands on for a matter of a few days. Also, working over-time is often impossible to avoid, as it can sometimes be 7 days a week. But it is important not to forget the value of how TTF treats every artist. TTFB is growing steadily, and I believe it will only grow stronger and bigger in time.

What is your favorite art form?

This is perhaps the most difficult question of all. Music, stories, fashion, photography and lighting. Wait, that IS previs, LOL! If I must choose one then it will have to be music. There was one time I was sharing dinner with a fellow previs supervisor from another studio, and he asked if we have an in-house editor. I said, “not at the moment, I do all the editing myself.” I don’t believe in delivering individual shots and calling it previs. They must be well edited, well presented, well put-together with the proper soundtrack. To my surprise he replied, “that’s because you have a music background.” This is when I realized and thought, indeed. Music is a major part of previs as well as a big storytelling element. And my love for music certainly becomes handy at work.

Where do you draw your inspiration from?

Fashion! I’ve always been a fan of fashion since a young age. Back when I was a kid in Hong Kong, I did styling work for a fashion magazine dressing celebrities. For years I’ve been following a few designers, studying their works for every season. One that inspires me the most is Hedi Slimane. I’ve been a fan of him since his early days at Dior Homme, to Saint Laurent, to currently at CELINE. You can show me a piece of his work from any of his previous shows and I can probably tell you which year and which season that it’s from.

What was your biggest influence as a kid?

MTV! When I first arrived in America in the 80s, I was exposed to rock, hip-hop, pop and all the rest. It was mind-blowing for someone who had never heard of this great music prior to that. I would watch MTV religiously. I mean it would be on my TV 24/7, even as I was asleep.

Are you doing anything at the moment to grow and develop your skills?

I think as a previs artist (or any other artists) we are cursed with never watching movies the same way again. We can’t help but to watch movies every time with an inquisitive mind. What is the director thinking here? How would I tell the story differently? What did I learn from this film and how can I apply it? This is not to say that I don’t enjoy watching movies anymore, not at all, but we learn something new every time we go to the cinema. If you don’t, you’re not watching carefully. There must be something, even if that something is “what not to do.”

Jack Sparrow, no sorry, Captain Jack Sparrow. I want to know if I can out-drink a pirate!

Describe what you were like as a 10 year old

Shy, very shy. I disliked being in the spotlight. I think I still fear going up on stage giving speeches, but it’s part of my job now and I have to learn to overcome this fear.

If Hollywood made a movie about your life, who would you like to see cast as you?

It will be impossible that there’ll ever be a movie about me, as no one would watch it. (Laugh) But if there was one, I would love Daniel Wu to play me. He’s from Hong Kong, speaks both languages perfectly, and he is a handsome fellow.

You’re getting into a very dangerous zone here, as I love Karaoke (or KTV as we would call it) and I have a whole list of go-to songs. Is this an invitation? Come visit Beijing, I’ll show you the best KTV spot in town!

What is your name and what is your position at TTF? My name is Billy Tai, and I’m Creative Director at The Third Floor Beijing (TTFB). How long have you been with TTF? I was at the LA studio for around 2 years on and off before moving to the Beijing studio. I have been...

Shiba Inu welcomes The Third Floor to SHIB.io The Metaverse

What is your name and what is your position at TTF? My name is Billy Tai, and I’m Creative Director at The Third Floor Beijing (TTFB). How long have you been with TTF? I was at the LA studio for around 2 years on and off before moving to the Beijing studio. I have been...
Prv