The View From The Third Floor: Todd Constantine 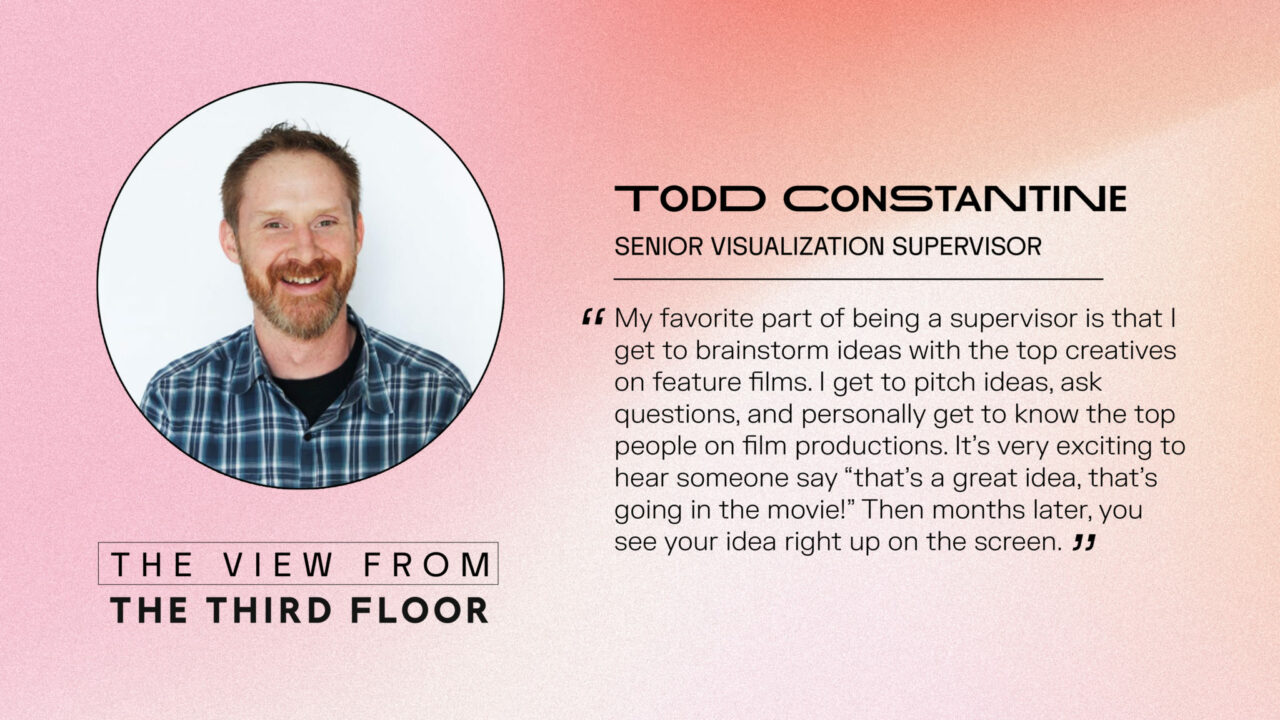 What is your name and what is your position at TTF?
Todd Constantine, Senior Visualization Supervisor

How long have you been with TTF?
11 years

What does your role look like day to day?
My role changes day to day. A typical day goes something like this (at least during Covid): Log in and check emails to see if the clients are requesting any time sensitive material. Attend various client calls, going over the latest submissions of work, getting notes/feedback, pitching new ideas, and talking about upcoming sequences. Jump on a video meeting with my leads to go over assignments for the day and goals for the week. Attending a team meeting to relay any notes/assignments and see how everyone is doing. Ping individual artists for further explanations/notes on work. Try and get some shot work done myself. Coordinate with editorial to see if shots are working in our running sequence edit. Preparing shots/3d files/etc for delivery at the end of the day. Rinse and repeat.

What led you to work in the visualization and entertainment industry?
As a kid, I was completely captivated with animation, specifically Disney features. I started drawing around 8 years old and it was my one and only pastime hobby until my 20s. Not knowing how to get noticed by Disney (as it was the time before the internet and I had no idea there were animation colleges out there), I never knew my portfolio of drawings that ranged from realistic renders to zany cartoons, wasn’t really what Disney looked for in prospective hires. They wanted hundreds of gesture drawings of people and animals. Realizing (after college) that I’d need years to train for a 2d animation position, I ended up starting at the bottom of the movie business and got a job as a PA at a VFX studio. From there, I basically learned on the job or taught myself various aspects of the VFX industry including data i/o, 2d and 3d tracking, roto, and animation. After years of work at numerous companies, I landed a final animator gig at MPC. That led me to SPI. Then a friend recommended a small company doing previs (which I knew nothing about) and I have never left.

What is your favorite part about working for TTF?
I really enjoy the people. The people (especially the owners) foster a loving and friendly atmosphere. There’s a common wish to have fun and fight alongside each other to get out challenging work. I’ve been at companies where there’s a lot of backstabbing and posturing. Putting others down to get ahead. I’ve never felt that at TTF. No company is perfect of course, but the owners really made me feel like they didn’t hold themselves above everyone else. They really care about the people who work for them. The other side is the work. I’ve learned more about actual filmmaking in the first year at TTF, than all the 11 years proceeded.

My favorite part of being a supervisor is that I get to brainstorm ideas with the top creatives on feature films. I get to pitch ideas, ask questions, and personally get to know the top people on film productions. It’s very exciting to hear someone say “that’s a great idea, that’s going in the movie!” Then months later, you see your idea right up on the screen.

What advice would you give someone looking to get into this industry?
Find out exactly what discipline you want to invest your time into and give it all the time it deserves to be good at it. If you want to be a generalist, then try it all. If you want to build assets, study production designers, get an eye for great conceptual world building. If you want to be an animator, of course practice all the functions and fundamentals of animation. I would heavily emphasise basing your animation decisions on storytelling. Stop trying to perfect a footfall when your animated piece doesn’t invoke an emotional response through clear storytelling.

Biggest milestone at TTF?
I’d say my biggest milestone at TTF was the first time I supervised a show. The current supervisor had to leave to start another show and left me running the team. Sink or swim time. Multiple sequences were needed and I had to conceptualize all the shots and in what order they go in, hand out the assignments, give feedback and pitch those ideas to the director. I’d never done anything like that before and it was exciting but terrifying. I was able to prove to myself that I had skills and talent to help create movies. Having the director like and approve my team’s work was an amazing feeling. The second milestone was getting to work with Steven Spielberg, (which was awesome.)

If you hadn’t become an artist, what would you have been?
I don’t know, I never thought of anything other than art. I knew I’d be doing something artistic for the rest of my life.

Where do you draw your inspiration from?
Tons of places. Mostly other feature films, books, tv shows, stories from people around me. I collect “art of” books and it’s so amazing the amount of artistry and number of people it takes to finish a movie.

What piece of media was the biggest influence on you as a kid?
As I stated above, it was mainly Disney Animation. After that, most of my biggest influence came from early 80s Saturday morning cartoons. Can’t beat a Transformers, Thundercats, G.I.Joe lineup!

You’re on the run from a hoard of zombies, what do you do?
Probably die first, I’m terrible at running.

If not LA, where?
New Zealand was a great place to live when I worked there. I’d like to go back someday.

Fictional character you’d share a pint with
Optimus Prime..maybe superman. I’d ask them to drive/fly me around.

What is your name and what is your position at TTF? Todd Constantine, Senior Visualization Supervisor How long have you been with TTF? 11 years What does your role look like day to day? My role changes day to day. A typical day goes something like this (at least during Covid): Log in and check...

What is your name and what is your position at TTF? Todd Constantine, Senior Visualization Supervisor How long have you been with TTF? 11 years What does your role look like day to day? My role changes day to day. A typical day goes something like this (at least during Covid): Log in and check...
Prv